The Common Structure of Stories and Its Classification

Some rough ideas while I was working on a new version control software (the ideas here are not related to the software though). I wish I could deduct new idea out of this but I don't think I can. Expect word salad.

The four structural levels of story

Currently all the stories (that I have ever read/experienced) can be classified into four levels.

Here I use the word "plot" differently:

I think I should introduce the concept of linearity (for stories of course, not maths) here:

Almost all stories have at least some kind of linearity (or else they wouldn't be called stories). The higher the levels, the lower the linearity.

Level 1 is the most common. Just plain old stories, from a beginning to an end.

Some examples of level-1 stories: 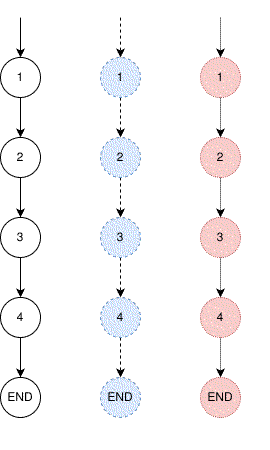 A diagram illustrating the structure, plot and plot structure of a level 1 story.

A story is considered to be in level 2 when there are branching points within the story that leads to different plots. From level-2 onwards, the fact that some events depend on the previous occurence of other events - event dependency is introduced with the player's interactive selection.

Level 2 can be further divided into level 2a and level 2b.

A story is considered in level 2a when the plot structure is weakly linear but not strictly linear, e.g. there are branching points to which the overall plot depends. 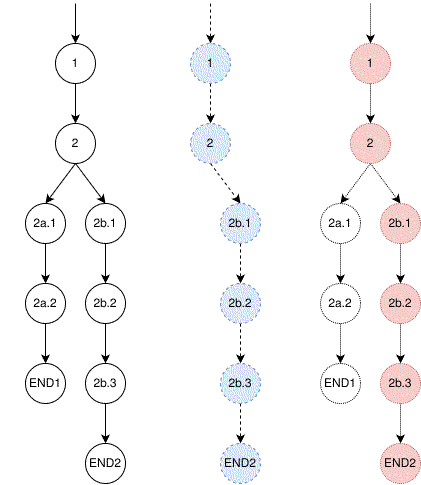 A diagram illustrating the structure, plot and plot structure of a level 2a story. 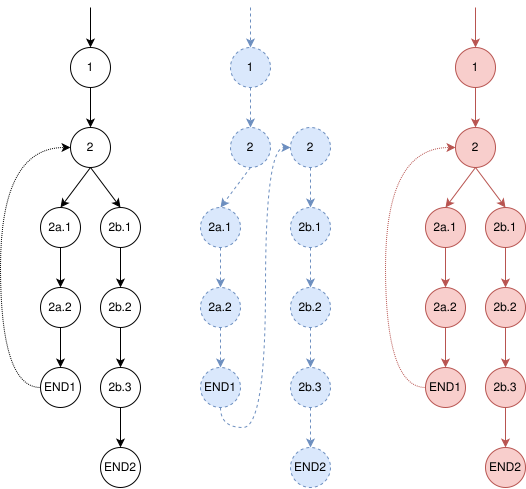 Some examples of level 2a stories:

A story is considered in level 2b when the plot structure is not weakly linear but quasi-linear. Level 2b stories take advantages of plot devices and media mechanisms like time travel, save/load and New Game Plus (N周目 "N-shuume", lit. the N-th time in Japanese; mostly used is 二周目 the second time). 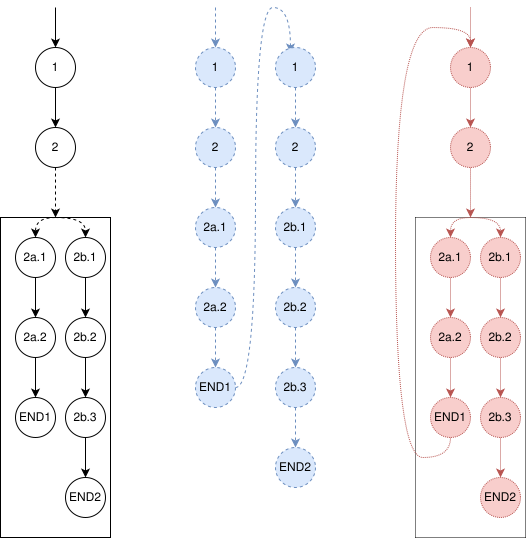 A diagram illustrating the use of New Game+. The box after Node 2 signifies that this is not an explicit branching point - it's an implicit one that depends on how many times you've completed the story. 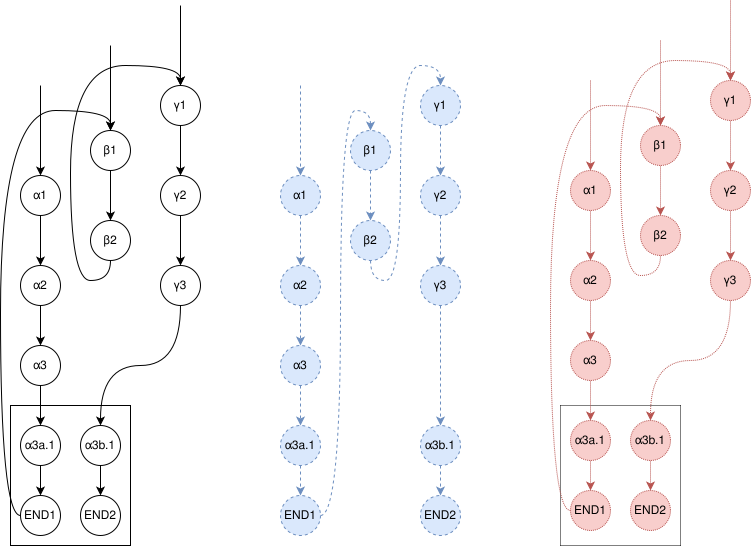 A diagram illustrating the use of time travel. The Greek letters represent different timelines. The box at the end represents "changed future". As the plot diagram shows, fixed-time loops like this can be encoded into strict or weakly linear forms.

Some examples of level 2b stories:

Starting from level 3 the idea of "the main plot" begins to fade into unnecessity. Instead of one whole story, some people might argue this is A level-3 story is more like a bunch of inter-connected lower-level stories. The difference between level 3 and level 4 is that in a level 4 story event dependencies themselves can be freely dependent on other event dependencies.

Some examples of level 3 & level 4 stories:

Beyond the four levels

What would be the definitive characteristics of a level 5 (or 6, or 7, or 8, or...) story? Is it even possible to have such a story? To be honest I don't know; that's what I'm trying to find out by coming up with this whole "level" idea. I thought after arranging them this way I can find out the common principle and deduct higher-level stories (and media for such stories) from there, and now I think I may have failed.

But there's one idea I'm working on that may just be enough to be called a level 5 story.

When two events are superimposed one of the two things happens:

A diagram of a basic parallel structure. The player is on the `a` line, while the `b` line is happening independent of `a` *without the player knowing* until node X. Node X is the superimposition point, where the two storyline crosses: maybe the player did something that will affect the characters in the `b` line, maybe there's a global event independent from the will of the player. It could be used as a device for old-fashioned boy-meets-girl love story or something like "all hell breaks loose". The choice is yours.

Normally there should be mechanisms for players to peek or even switch into the b line, or else it would just be a pretentious level 1 story.

A diagram of a basic hyper-narrating structure. The nodes 2a, 2b and 2c happens in the same place & at the same time (same for node 4a and 4b).

To be honest, this is not that much about stories: I originally envisioned this as some kind of "smart e-Learning" thing where node 2a, 2b and 2c (and similarily node 4a & 4b) would be about the same topic but at different difficulty level.